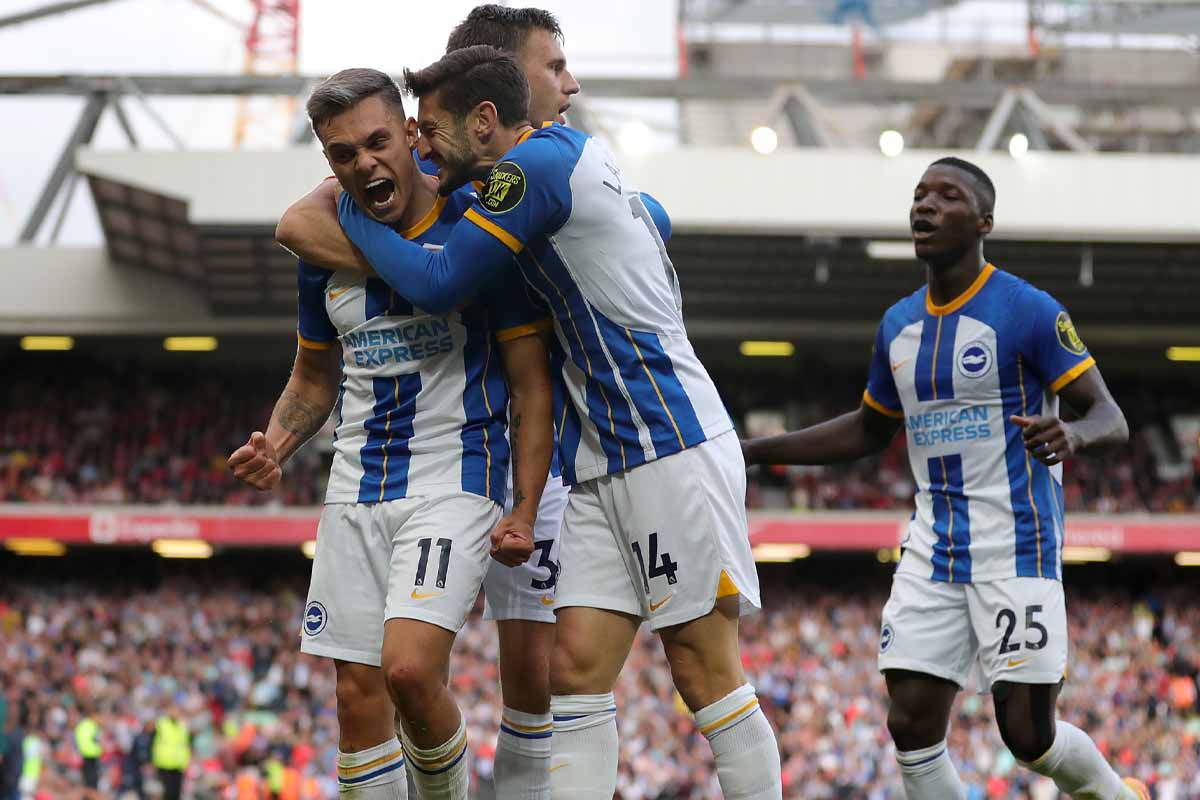 Leandro Trossard notched a hat-trick in Brighton’s draw at Liverpool as new boss Roberto de Zerbi got his reign underway with a battling point. Trossard was on target after just four minutes, finding the bottom corner from Danny Welbeck’s pass, before adding a second 13 minutes later, this time from Solly March’s ball. The Belgian completed his treble late on when he was on hand at the far post to scoop the ball home.

Miguel Almirón scored a brace as Eddie Howe’s Newcastle United thrashed Fulham at Craven Cottage. Nathaniel Chalobah received an early red card for the hosts before they lost star striker Aleksandr Mitrovic to injury, while afterwards Howe preferred to focus on the positives for his team. “It was all positive, a really good performance,” said the Newcastle boss. “Today we were at a pivotal moment in our season and I emphasised how important the game was. I hoped this performance was coming but nothing is ever guaranteed in football and I think every week you have to give yourselves a chance to win. Yes there was a sending off, which certainly helped us, but even before that I thought there was a good feel to the team.”

Goals from Jarod Bowen and Gianluca Scamacca lifted West Ham out of the drop zone and eased the pressure on manager David Moyes following the home win over Wolves. Italy international Scamacca opened the scoring with a brilliant volley into the top corner, the Hammers’ first goal prior to half-time this season.” I thought Scamacca was very good,” said Moyes. “I’m only reminding people but he was out for three weeks with a virus, in case anyone forgot. We really like him a lot. He’s slightly different from what we have, he can link play and hold it up.

Arsenal emerged victorious in the North London derby and boss Mikel Arteta claimed his players are ‘hungry’ for more after cementing their place at the top of the table. “We are really hungry,” maintained Arteta. “You can feel the desire and humility because they haven’t done anything yet that is important. That is what keeps us driven. We are focused on what we are doing and we are going in the right direction. We can play at a really high level.”

Erling Haaland became the first player to score in three successive Premier League home games as Manchester City heaped humiliation on neighbours Manchester United in a 6-3 win at the Etihad Stadium. The Norwegian made it 17 goals in 10 games since joining the Blues in the summer, while Phil Foden was also on fire as he notched his first treble for City as they moved to within one point of league leaders Arsenal. Pep Guardiola’s men made a lightening start and were 4-0 up at half-time, before City took their foot off the gas and United pulled two goals back late on, to record a scoreline that flattered them. The goals were greeted in near silence as their fans had already departed the stadium well before the final whistle.

Bruno Lage was sacked as Wolves manager after a fourth defeat of the season at West Ham plunged the Midlanders into the relegation zone. Wolves spent over £100m on new signings over the summer, but the club has grown increasingly frustrated with the team’s struggles and ended the Portuguese’s tenure after just 16 months in charge. Lage succeeded Nuno Espirito Santo and led Wolves to 10th place in his first season in the Premier League. However, they won just once and lost nine of their last 15 Premier League matches.

Southampton made it four defeats in five after going down to Everton at St Mary’s and have now lost seven of their last 10 home matches, with boss Ralph Hasenhuttl seeing his team drop 92 points from winning positions since he took over. “We never stopped trying or playing and the effort was there, but effort alone is not enough – you need quality to score at the right moments. Premier League football is brutal and when you don’t score you concede. This is what happened and what this young team has to learn,” said Hasenhuttl.

Liverpool kept their 19-month unbeaten home record intact in the 3-3 draw with Brighton at Anfield, but boss Jurgen Klopp admitted it was horrible to watch his team concede three times. “You need to defend and we didn’t do that,” said the German. “We weren’t sitting deep or attacking high up the pitch. We were in between and their players could turn between the lines. It was horrible to watch and reminded me of the first part of my time at Liverpool. We were just not convincing.”

Manchester United boss Eric ten Hag accused his Manchester United players of a ‘lack of belief’ in the 6-3 hammering at Manchester City. Ten Hag said: “It’s a lack of belief and when you don’t believe on the pitch you can’t win games; that is unacceptable. Our plan was to show bravery and confidence from the first minute but we didn’t do it. Instead we gave it away easily and folded like a pack of cards. With this lack of confidence we cannot win games. We have to accept it but this performance was not acceptable.”

Nottingham Forest slumped to the bottom of the table as they were totally outplayed in a 4-0 defeat at Leicester City, who leapfrogged Steve Cooper’s men in the standings and recorded their first win of the campaign. It was a fifth straight loss for Forest – who brought in a staggering 23 new signings in the summer following promotion last season – for the first time since January 2004.